Leon Taylor is the district administrator for Jamaica Little League. After 50 years living in Canada, he returned to his native Jamaica, where he now offers baseball to an island full of youth athletic potential.

“We’re in the process now of initiating Jamaica Primary School Baseball League for kids from nine to twelve years old. The league that will commence will be the first type of competition we’ve had here. Baseball has to compete in the schools with football, cricket, and to some extent, field hockey. Of course, track and field is huge here as well. This is one of the reasons why Jamaica is fabulous – because the kids have athletic ability.

“For us promoting baseball, we’re not interested in the number one runner, because the kids who are fast and into track and field can aspire to be the next Usain Bolt. We’re not looking for that. We’ll take the third or fourth tier kids who are quick enough to run the bases. There was one kid who joined us and he managed to hit a foul ball. He hit the ball, and this kid was so fast that when I was screaming foul ball, he was already on his way to second base.

“The objective is to start at the primary school level. We go into the primary school for the physical education class for forty-five minutes to do an introductory session. I introduce the kids to the diamond – the area in which you play baseball. I introduce them to the positions and the numbers on the field. I introduce them to base running. For starters, we practise throwing, and they already know how to catch from having played cricket. They get all that in 45 minutes. By the end, they look forward to the next session asking me if I’m coming back the following week. It means they’re curious.

“I say, ‘Why not give them an opportunity to play sports?’ Jamaica is at the stage now where all these sports have a certain number of players.

What happens to the kid who’s not chosen for that track & field team or that cricket team? Baseball is an alternative. So the kids don’t sit around. In fact, baseball sits around and waits for these kids.

“Baseball is a new, non-traditional sport in this country so one of the major challenges is coaching. If the game is to expand across the country and the kids are going to learn, we have to have coaches who can teach the game. The Caribbean Educational and Baseball Foundation has helped address this issue.

“The other major challenge is baseball infrastructure because we don’t have a single baseball field on the island that we can properly designate as a field. Still, a lot of people hear about what’s happening and they ask us to come to their community. We’re going to keep spreading the gospel of baseball and softball. We have the ideal weather conditions and we can play this sport year-round. We want to have this sport be played and we will be good at this.” 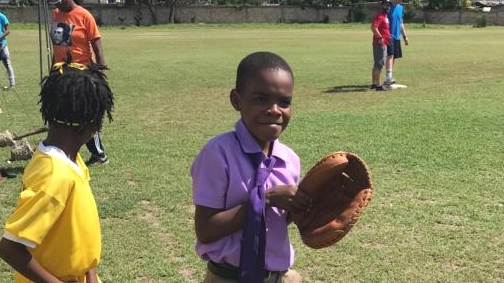 Leon is a retired architect, although he’s something of an architect again, this time of baseball back in his home Jamaica. He’s gaining the support of former Major League Baseball players from the Caribbean island who agree with his sentiment that “we’re poised now for baseball to really take off.”

Author Nicholas Bruce has been involved in sport and/or development for nearly 20 years, initially prompted by a job at the Olympic and Paralympic Games, then a volunteer position in a refugee camp. He’s currently based in Berlin.